The Klis fortress, one of the most significant strongholds in Croatia, due to its strategic importance had a significant defense position. From the 2nd century BC this area was inhabited by the Illyrian tribe of Delmati, while the first records about the fortress from the 10th century speak of the Roman fortress Kleisa being besieged by the Avars and Slavs which hastened the conquering of Salona in the first half of the 7th century at the time of arrival of the Croats. Two centuries later Klis had already become the ruler’s property and one of the centers of the Croatian state. 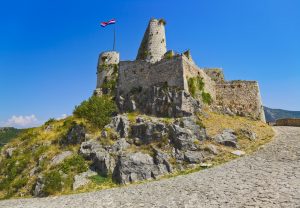 In the 9th century Klis was the seat of the Croatian dukes and kings of the dynasty Trpimirović. Duke Trpimir I, the founder of the Croatian royal House of Trpimirović, is significant for spreading Christianity in the Principality of Littoral Croatia. In the document issued by prince Trpimir in 852 the court is mentioned as his property, and it also became the center of the Early Croatian Littoral or Klis County (Parathalassia). He largely expanded the Klis fortress, and in the valley under the fortress, in Rižinice, he built a church and the first Benedictine monastery in Croatia.

During the reign of the first Croatian king, Tomislav, Klis and Biograd na Moru were his chief residences.

The end of the 11th century was marked by the end of the Croatian national dynasty and Klis fell under the rule of the Hungaro-Croatian kings. One of them, Bela IV and his family used the Klis fortress as shelter during the Tatar siege in 1242.

In March 1242 at Klis fortress, Tatars who were a constituent segment of the Mongol army  suffered a major defeat while in pursuit of the Hungarian army led by King Béla IV. After their defeat by Croatian forces, the Mongols retreated, and Béla IV rewarded many Croatian towns and nobles with “substantial riches”.

During the Late Middle Ages, the fortress was governed by Croatian nobility, among whom Paul I Šubić of Bribir was the most significant. By the end of the 13th century Klis was ruled by the princes Šubić’s of Bribir, the mightiest family of Croatia, and from 1335 the town was again under the protection of the king and the administration of its fortress commanders.. During his reign, the House of Šubić controlled most of modern-day Croatia and Bosnia. Excluding the brief possession by the forces of Bosnian King, Tvrtko I, the fortress remained in Hungaro-Croatian hands for the next several hundred years, until the 16th century.

The most turbulent time of the history of Klis was the beginning of the 16th century, the time of the greatest Turkish invasion to these areas. An important role in its defense was played by Petar Kružić, captain and town duke, who together with his warriors Uskoks managed to resist Turkish attacks and besieges for two and a half decades. With his death on March 12, 1537, Klis fell under Turkish rule which meant the loss of the most powerful Croatian fortification in Dalmatia. For 111 years the Jadro River was the border between the Turkish Klis (Kliški Sandžak) and the Venetian controlled Split.

During one of the attempts to liberate Klis, the Croats led by Split noblemen Ivan Alberti and Nikola Cindro utilized the element of surprise and managed to take over the fortress in April 1596. However the Turks conquered it again by the end of May, thus defeating Croatian general Juraj Lenković who came to the aid of the defenders. As late as March 31, 1648 the Venetian army led by general Leonardo Foscolo, joined by the numerous Croatian locals, managed to liberate Klis from the Turks after 10 days of hard-fought battles and achieved its greatest success during the Cretan War. The area of Klis was organized as a special military and administrative area ruled by the providur based in Klis. The Klis fortress, completely restored and significantly enlarged, remained under the flag of Venice until 1797 when it was taken over by the Austrians.

From 1805 until 1813 it was shortly ruled by the French. The period of the second Austrian administration lasted until the end of World War I in 1918, when, with the fall of the Austro-Hungarian Monarchy, Klis, together with the remaining parts of Croatia shared the same fate of all Croatian lands within the borders of the Kingdom of Serbs, Croats and Slovenes, and afterwards Yugoslavia. During World War II, from April 1941 until October 1944, the Klis fortress was for the last time used for military purposes, mainly as the stronghold of Italian and German occupation forces. Finally in 1990 the flag of the sovereign Repubic of Croatia was placed on it.