Visovac is a little island situated in the area of the lower flow of the river Krka between two waterfalls in Krka National Park – the Roški waterfall and Skradinski buk. The island is owned by the Catholic Church. Prior to human habitation of the island, it was only a “White rock” in the middle of the lake. It got today’s shape thanks to the work of the priests that brought the land to the shallow water and separated it from the water with a wall. In that way the little island with its vegetation became “a little paradise on Earth”. 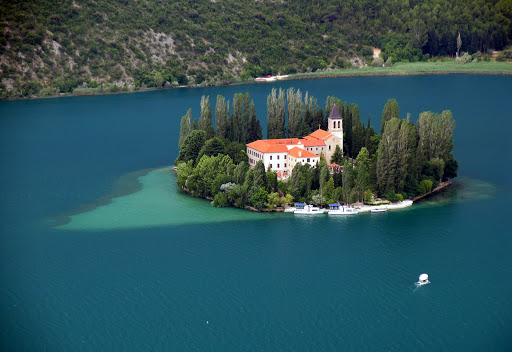 Starting from the first inhabitants of Visovac, the eremites of St. Augustine who build up their monastery and a little church on that rock, up to our days each generation built something new up, renewed something old, changed or constructed something starting from foundations that in the war times and in the natural disasters was damaged.

Visovac is also the island of Our Lady of Mercy, one of Marian shrines in the Republic of Croatia.

Due to its museum, archive, library, paintings, liturgical vessels, mass priestly clothes and votive offerings, its novitiate and reception of pilgrims and tourists, Visovac belongs to those places where the culture, religion and education exist harmoniously side by side.

Check out our Krka Waterfalls and Sibenik private tour.