The city of festivals

Sibenik is located in Central Dalmatia where the River Krka flows into the Adriatic Sea. It is a political, educational, transport, industrial and tourist center of Sibenik-Knin county. The Central Mediterranean, a fortified town by the sea, the library of the historical sites and culture, protected by the limestone rocks and mountain hinterland, blessed with more than 300 islands, islets, cliffs and reefs in its waters, a rich vineyard treasury united in a unique poetry of the urban centre.

St James cathedral is a construction made of white stone blocks in the clouds without any supporting part made of wood or any other connecting material. When you see this building  it  will fascinate you. This cathedrale is the most significant architectural achievement of the 15th and 16 century inCroatian, built up in a unique Gothic and Renaissance style with a frieze of 71 human heads in the exterior, and sculptures and mosaics in the interior. The Cathedral of St. Jacob was enlisted in the UNESCO World Heritage list in 2000.

Gods were kindhearted when they created this area; from the National Krka waterfalls, its rocky surroundings, islet Visovac, on which the Franciscans monastery found its setting, to the canyon of the river Krka, where the oldest orthodox monastery is situated; from the picturesque vineyards of Primosten to the National park Kornati looking like the white tears spread on the blue sea. 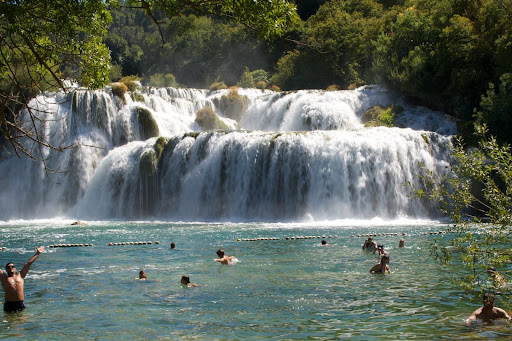 Unlike other cities along Adriatic coast, Sibenik was founded by Croats around the 9th century. Town Šibenik made a progress and it was mentioned for the first time in the 11th century in a document written by the king Petar Kresimir IV. Through the history many different nations was fighting for this town – from the Austrian-Hungarian monarchy over Byzantium to Venice, but the town was still making progress, spreading and developing its culture, art, navigation, trade and economy in general. Šibenik was under the Venetian rule for long 400 years, but from that period we have the most significant historical and cultural sites of Šibenik today. Among them is also the main symbol of the Town today – the Cathedral of St. Jacob.

Durin the Venetian government Sibenik becomes one of the most important humanistic and Renaissance centres. It was gathering place of different artist (writers, architects, historians, artists). One of them has a special place in history of Šibenik, he is Faust Vrančić. He was a polymath and bishop,  who was interested in different fields from science to theology, he published the book of inventions “Macchinae novae” as well as the “Dictionary of the five most noble European languages”, making it the first dictionary of the Hungarian and Croatian languages at the same time ever printed.

COASTAL SETTLEMENTS OF THE SIBENIK REGION

Sibenik’s cuisine is a typical Dalmatian cuisine. Typical Dalmatian cuisine represents dishes with aromatic plants and olive. The so called “sir iz mišine” (sheep cheese) is an autochthon product, which has strong, refined and unforgettable taste, smell and flavour, is formed in the natural shape of a ball, and it has been delivered at the market place. It suites best with the domestic bread made under ‘peka’ and aromatic red wine. This Region is also famous for red wine Babić which is produced from Primošten’s world-known red-grape sorts. Smoked ham of Drniš is another gastronomic delicacies awarded many times because of its quality and technology of preparation. EVENTS AS THE MOST IMPORTANT CHARACTERISTIC OF THE SIBENIK’S AREA

In this area are organized various events such as The International Children’s Festival, The International Medieval fair, enjoy a capella song evenings (“klapa” evenings) and the Dalmatian chanson evenings, the antique fair and the sport-entertainment events “Bodulska pripetavanja” with lots of organized programs, performances, plays and the whole day entertainment on every island of the Šibenik’s archipelago.

If you would like to explore Sibenik, join us on our Krka Waterfalls and Sibenik private tour.